Although born in LaPlata, MD and baptized at Holy Ghost Church, Father Joe’s family moved from Issue to Forestville in PG County when he was a young boy and he grew up in Mount Calvary Parish. The family continued to grow and Father Joe would be one of five boys and two girls. He graduated from Suitland High School in 1978. Accepted into the seminary, he spent his freshman year at St. Francis Seminary and College (now University) in Loretto, PA, where he studied with the Franciscan TOR’s. The seminary closed that year, and he was transferred to the Seminary of St. Pius X in Erlanger, KY. He loved the structure and rules there and earned 159 credit hours (largely in History and English) with a degree in Philosophy. St. Pius X closed its doors a year after his departure. Then he was sent to Theological College at the Catholic University of America where he studied Theology. He was ordained a deacon in 1985 and a priest on May 17, 1986. He has worked in numerous parishes:

Brian and his wife Victoria have two daughters. Before becoming a deacon in June 27, 2015, Brian served his parish as a Reader and Extraordinary Minister of Holy Communion.  In addition to assisting at Masses, preaching, doing sick calls, conducting baptisms and witnessing weddings, Brian has led our Bible Study in the past and current runs the monthly Baptism Preparation Class.  He is our marriage FOCUS director.  He celebrates the Third Wednesday of the Month Communion Service at 7:30 PM.  He generally preaches at various Masses on the Third Sunday of the month.  He became a Fourth Degree member of the Knights of Columbus in 2019.  Brian has also served his community by making visitations for prayer and comfort to the residents of the Collington Senior Living Center and bringing them communion. Brian is Senior Business Consultant at the United Healthcare Group, Baltimore, MD.

A longtime parishioner and mother of two wonderful kids, Joe and Jenn, Ilene has been the secretary and full-time administrative assistant since 1997. The office couldn’t run without her.  What does she not do?

Indeed, if you visit or call, she is first face you see and the voice that greets you.   Although Ilene’s kids are now all grown up, they still keep her busy.  Hobbies include painting, and crafts. Music interests include contemporary country music. 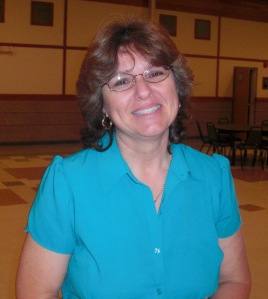 Pam has been the Director of Religious Education since June of 1998. Prior to coming to Holy Family, she was the DRE at Ascension parish in Bowie for 5 years. She began her church service as a catechist at St. Peter’s in Olney and has taught religion for over 16 years.

She is a certified Master Catechist through the Archdiocese of Washington and is currently in charge of all programs relating to children, youth and the RCIA.  She is also the current parish liaison or director for Prince George’s Community Resources which assists older teens and adults with special needs in the county.

Other interests include: spending time with her husband and children (she has four), scouting (she has been a Cub Scout Leader and Girl Scout Leader), computers, reading, outdoor activities (camping, fishing, recreational sports) cooking, music and crafts. Her husband is the parish accountant.  She is a member of the Ladies of Holy Family Mitchellville.

Pete’s day job is with Orndorff & Spaid Roofing.  However, for many years he has worked as the accountant for Ascension Church in Bowie, MD.  As the bookkeeping job for parishes became more computerized and our former accountant’s health failed (James Sassa), Pete stepped in to work with Holy Family Parish.

He comes in a few times a month to make sure that our books are straight and he regularly meets with the pastor and our Finance Council.  We appreciate his professionalism.  He is married to our DRE Pam Rozanski.  He is a brother Knight with Fr. Kidd Council of the Knights of Columbus.

Carol Wolfe-Ralph, pianist, organist and choir director, has over twenty years church experience, working with children, collegiates and adults. She has directed both vocal and handbell choirs. She holds a Doctor of Musical Arts Degree in Piano Performance from the University of Maryland.  She has served as President of the Maryland State Music Teachers Association and as an Adjunct Professor for both Goucher College and the Washington Bible College. She teaches approximately thirty private piano students out of her home.

Carol regularly directs and plays music at the 9:30 AM and 12 Noon Mass on Sundays.  Any concerns or comments can always be addressed via in person or email.  They rehearse immediately after the 9:30 AM Mass.  We would love to have additional choir members.  Cantors are also needed.

Deacon Tyrone Johnson is our Music Minister for the 7:30 AM Sunday Mass.  He formerly led the Gospel Choir at weekly Masses at St. Mary of the Assumption in Upper Marlboro, MD.  He is a proficient singer and expert at the keyboard.

Mrs. Wilma Bandong is our Music Minister for the Saturday Anticipatory Mass at 5:30 PM and the 2:00 PM Filipino Mass held on the Fourth Sunday of the month. Wilma leads the Filipino-American Heritage Choir. They rehearse from 1 to 2 PM prior to the monthly Mass. In addition to the monthly Mass, this choir also does special Masses and the annual Simbang Gabi novena liturgies prior to Christmas.  She conducts a youth choir at this event as well and helps with one of the Christmas Eve liturgies.  Wilma also has her own music studio and has assisted Prince George’s Community Resources with music therapy classes.  If interested in being a part of her choir, please call ASAP.

A RECTORY THAT IS WELCOMING TO OUR FURRY FRIENDS

As a public service announcement to those who hated and/or feared her, we wanted to let everyone know that the cat which prowled after Father Joe since they first met in 1995 (20 years) has finally passed away.  Her name was Miss Kitty Kat Nottingham (although her long-time nickname was RAMBO).  We received many bad reports about her and she brought disgrace upon her family.  She died with one eye open, ready to pounce!  Even now we sometimes think we hear a ghostly meow.  Bye Kitty!

Going from devils to angels, you would often see Ilene with Peanut, her lovable pet dog!  Unfortunately, this lovable (if always snoring) dog passed away in 2017.  She will be missed.

Her new canine associate is Pixie.

It has been argued that Holy Family has literally gone to the dogs under the pastor’s leadership.  Unofficially the weekday staff includes Lola (left), Bailey (right top) and Pixie (right below).