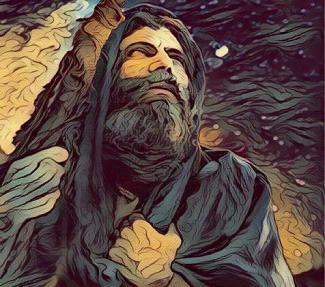 The narrative of Genesis jumps from the temptation and fall of those who are our first parents by nature to the calling of Abram or Abraham who becomes our father in faith. God calls him out from his tribe to start a new people in a land that they can claim as their own. The Lord tells him, “All the communities of the earth shall find blessing in you.” So it is, today Christians, Jews and even Muslims claim to be children of Abraham. The one true God promises that if we will obey him then he will be our God and we shall be his people.

God’s ways are not our ways. The Almighty could have chosen the ancient Egyptians who perfected writing and bred generations of scientists and mathematicians. They built the great pyramids. Long before the discovery of antibiotics they were using bread molds against infections. But God did not choose the Egyptians.

God could have chosen the ancient Greeks who gave us great philosophers like Plato and Aristotle. They were also advanced in astronomy and mathematics. While the truth would later be lost, the Greeks had figured out that the world was round and were pretty close in reckoning its size. They gave us great literature, especially from the pens of playwrights, and boasted of the most important library in the ancient world. But God did not choose the Greeks.

The Lord could have first chosen the Romans, who boasted of an empire that had conquered much of the known world. But God did not choose the Romans.

Instead, the seed of salvation was planted with a man from an obscure family of nomads in the desert. They were nothing. They had no philosophy or literature or science or power about which to brag. Thus, it began by taking those who were no people and generation after generation formed them from a family to a tribe to a nation and finally into a faith from which would come the long-awaited Messiah. Throughout, God revealed his face and ordinances to them. Their great leaders would become the stuff of legend— Abraham, Joseph, Moses, Saul, and David. The legacy of the patriarchs and prophets would lead to the Christ.

We as Catholic Christians acknowledge with respect this history. We make a spiritual claim upon Abraham as our own. It is in Christ that we become spiritual Semites. Salvation comes from the Jews. Our covenant is the consummation of the Hebrew covenant.

The psalm today gives us this verse: “Our soul waits for the LORD, who is our help and our shield. May your kindness, O LORD, be upon us who have put our hope in you.” We need to put this into the proper context. The psalmist is speaking about their hope as a people. The movement of salvation history is not linear but has highs and lows. When obedient, God favors them. When they forget God they suffer losses.

What began with Abraham continued with Isaac and Jacob. The honor given to Joseph would be devalued with wide scale slavery to the Egyptians. Appointed by God, Moses would lead his people out of Egypt and transmit to them the Decalogue. While God directed his people through the prophets, they would demand to have a king like other nations. The tragic figure of Saul was chosen. Later, the shepherd boy David would become their great king. Idolatry would plague them again and again. Solomon would build a great temple but it would be destroyed. The kingdom would be divided and Israel would fall, followed by Judah. The Babylonian exile would threaten their very identity as a people. The prophets echoed the promise of God that if they were to repent and return to fidelity then God would answer their cries for restoration. Returning to the land of Israel, they rebuilt the temple and the stage was set for the coming of Jesus Christ. Just as the Jews awaited the Messiah for eighteen centuries between Abraham and the coming of Christ, we are also admonished to “wait for the Lord” with “hope” in his second coming.

Our waiting for the Lord, as expressed in the second reading, is not a passive affair. While we must be patient, we are literally told to take a share of the hardship that comes with the gospel of Christ— our participation in the Lord’s passion and Cross. All the while we are reminded that we are not saved by our own works or limited plans but by God’s design or providence. Salvation and the final consummation of the kingdom of God come in God’s own good time. Indeed, the providence of God is traced to before time began. These are the final days. The victory is won in Christ who destroys death and realizes “life and immortality.” What we struggle with now is the unraveling of the effects of sin— suffering and death that are conquered but not yet undone.

The scene of the transfiguration in the Gospel points back to much of their salvation history and relationship with God. While Moses and others ascend mountains to commune with God, this is not always possible for a people on the move or in the desert. Thus, a special tent is reserved for communications with the divine. A cloud would descend upon the tent and the prophet would enter so as to receive God’s message for his people. Afterwards, the prophet would emerge and proclaim the word given to him. We find something of this imagery, albeit without the tent, when Jesus is baptized by John the Baptist in the Jordan River. “After Jesus was baptized, he came up from the water and behold, the heavens were opened for him, and he saw the Spirit of God descending like a dove and coming upon him. And a voice came from the heavens, saying, ‘This is my beloved Son, with whom I am well pleased’” (Matthew 3:16-17). We see it again in today’s Gospel selection. Ascending a mountain, the three apostles see Jesus transfigured by light and joined by Moses and Elijah. Jesus is truly the fulfillment of the law and the prophets. Peter, knowing the tradition of his people, wants to put up three tents. However, immediately “a bright cloud cast a shadow over them, then from the cloud came a voice that said, ‘This is my beloved Son, with whom I am well pleased; listen to him.’” Nothing is hidden to them about this communication from heaven but Jesus says to them, “Do not tell the vision to anyone until the Son of Man has been raised from the dead.”

God communicates himself to Abraham and begins the first People of God. God in Jesus Christ reveals himself to Peter and the other apostles to make ready for a New People of God that would receive the Spirit of God on Pentecost. The Church has also had her ups and downs but she remains the New Israel or New Jerusalem sustained by God until the Lord comes again. We are baptized as a nation of prophets, a royal priesthood. The time from the redemptive Cross of Jesus to the final consummation and last judgment is extended so that many more generations might be conceived and come to know Jesus as Lord.

I would like to close with a poem by the late Reformed theologian, Reinhold Niebuhr.

Nothing that is worth doing can be achieved in our lifetime;
therefore we must be saved by hope.

Nothing which is true or beautiful or good makes complete sense in any immediate context of history;
therefore we must be saved by faith.

Nothing we do, however virtuous, can be accomplished alone;
therefore we must be saved by love.

No virtuous act is quite as virtuous from the standpoint of our friend or foe as it is from our standpoint.
Therefore we must be saved by the final form of love which is forgiveness.

Father Joe Jenkins I am the pastor of Holy Family Church and a Catholic priest in the Archdiocese of Washington, DC.
View all posts by Father Joe →
This entry was posted in Uncategorized. Bookmark the permalink.